The father’s company went bankrupt. Ruan Jiujiu felt surprised but also got a sense of gratification.

She sent a message to Qu We intentionally: "Is the house and three million RMB ready? Waiting for you."

Qu Wei nearly smashed the phone with anger. She made a grimace of detestation and sent a message with fury: "No! Your marriage it's not my fart!"

After a while, Ruan Jiujiu knew that Qu Wei probably never wanted to see her again.

She shrugged. It was a pity because she wanted to tease Qu Wei again.

In fact, Ruan Jiujiu felt strange. According to the plot in the book, his father's company will be hit hard a year later and then went bankrupt. Why was the plot developing so fast now? She really didn't know if it was The Butterfly Effect.

Whatever, the book she read was sweet, which mainly described the love between the male and female characters, so it didn't matter if the plot changed slightly.

Ruan Jiujiu still remembered that the male character Gu You’s career wasn't always in a green light, and there had been ups and downs. If she remembered correctly, he'll be framed by a villain this year and went though a depressed time for a short time.

The heroine Xu Biying had memories of her last life, knowing that Gu You will definitely made some achievements. So she didn't give up on Gu You at this critical moment, but gently guided him and persuaded him to continue to work hard, which touched him a lot. It was at this time that the two finally settled and Gu You became her loyal man.

Sure enough, her sweet childhood, Gu You, turned into a star in e-sports circle. His social status rose sharply, and the heroine married him happily.

Ruan Jiujiu thought, Can you really have a good life as long as you had a rebirth?

If you had any memory mistakes and things developed towards a bad direction, then you will be in panic. The person, who was in such a dilemma but still calm down, was the real admiring one.

Ruan Jiujiu picked up her phone and looked at her face. Somehow, she felt pity for herself.

When Cheng Jun passed by to drink, he heard sighing and then looked at her direction. He saw her quietly said: "Why am I so pretty?"

As soon as Ruan Jiujiu entered the game room, she saw several friends was online, so she happily asked them to play the game together. It happened that there was a group mission recently, and they may get the latest equipment. So White Horse found some guys to play together

It didn't take long for White Horse to chat privately with Ruan Jiujiu.

White Horse: Jiujiu, guru said he had free time, do you mind?

Ruan Jiujiu hesitated for a moment. Now if she refused it again, it looked like she wasn't a nice guy because everyone was here now. What’s more, it was weird to leave just because of Gu You. Perhaps some people may even think they had affairs. So, accepted this invitation as long as they didn't talk privately.

The monsters in the small map were more difficult to fight, so Ruan Jiujiu planned to only follow behind to provide hp supply for others in time. Guru turned on his microphone and calmly instructed everyone to fight. His low voice sounded good.

Other people all joined in.

Jiu Jiu Jiu: Better no, my voice is ugly.

White Horse: How ugly it is?

Jiu Jiu Jiu: May be you want to block me.

Inner Journey to Homeland chuckled, causing several fans in the team to scream: "Guru! Your voice is so charming!"

Ruan Jiujiu pretended not to hear it.

In this round, Homeland performed so good that Ruan Jiujiu didn’t need to offer help. She watched him was commanding while calmly killed the monsters with the last shot. He got to be the best player in this round.

No wonder the little girls all liked him. Ruan Jiujiu had to admit that he, right now, was very charming.

The team obtained some equipment. White Horse enthusiastically asked Ruan Jiujiu to select them. Ruan Jiujiu's RMB equipment was much better than these. But she still took a ring politely and followed them out of the map.

Deng Bu Li Shao: Don’t go. It's rare that a nanny doesn't play coquetry , and the skill is not bad as well.

Deng had played games with other girls before. And the experience was very awful. Some Jade Immortals didn't play well but when there appeared some good equipment, they'll play coquetry and told their so-called honey brothers that they wanted them all. A straight guy like Deng who only liked games, hated this kind of girls. However, his teammates liked it.

So in such a comparison, he suddenly felt that Jiu Jiu Jiu, a reliable and quiet nanny, was a very nice teammate.

Some teammates changed their equipment and prepared to open a difficult abyss map. If Homeland wasn't here, they would certainly not dare to open it. Now guru was here, so maybe they can find some awesome equipment.

Hoofs to the West: Sis Jiujiu, I see you don't care equipment and level-upgrading, so why you play this game?

White Horse didn't like Qingfeng Biying, and everyone who with a clear eye can feel that guru had a little crush on Jiu Jiu Jiu. She definitely supported the two together. So at this time, teasing meant creating opportunities for them.

Ruan Jiujiu frowned. Gu You should be engaged to Xu Biying, so it shouldn't be the case to flirt with others.

In the book, Gu You was gentle and strong. Nothing like this should happen. Why would he want to hook up with other women when he had a fiancee?

Ruan Jiujiu felt awkward at her thoughts. This was a real world. Cheng Jun was not cold and ruthless as it mentioned in the book. Perhaps, she should not have a stereotype of Gu You due to the book.

While she was in thought, White Horse was quiet for a while: Well... Qingfeng Biying said she wants to join us.

Like Jiu Jiu Jiu, Qingfeng Biying was also a supporting role—Jade Immortal, in the game. Ruan Jiujiu wanted to grasp this opportunity to leave: Ok. So, see you guys.

Deng Bu Li Shao: No, we just need one more teammate. Stay here, next round is more dangerous. So I think we need both of you to offer more help.

Ruan Jiujiu twitched her eyelids. The name, Qingfeng Biying, was shown in the teammates list. She quickly turned on the microphone and her voice was soft: Sis Jiujiu, not like you, I'm not well equipped, so please take of me later.

Ruan Jiujiu wasn’t sure whether she satirized her or just was careless.

Jiu Jiu Jiu: Oh, I'm a RMB player. I can find you a better recharge package.

Qingfeng Biying was unhappy: Brother You, you made fun of me.

Inner Journey to Homeland: No. Let's continue the game.

Ruan Jiujiu got shocked by the voice "Brother You". God, how did she make such a shameful voice!

White Horse: A woman's coquetry is a killer.

When they were talking, the map was loaded. The gentle voice of Homeland: Two Jade Immortals follow behind. Don't worry, I'll protect you.

This round was extremely difficult, the boss’ hp that had been cut off will quickly regained, because it not only can bring back the hp on its own, but could summon the dead soldier to help itself. Ruan Jiujiu didn't care too much at winning or losing. Even so, she was scared by this brutal scene, but she still shouldered the responsibility on the front line.

"No, hold on!" Homeland, the only calm person said.

Ruan Jiujiu helped them to recover hp even her fingers were about to cramp. While carefully avoiding the attack, she was paying attention to the skill cooling time and assisting others at any time. Although her level was not high, she still had advantages—the powerful equipment and the hard work.

Unlike Ruan Jiujiu, Qingfeng Biying, who was a few dozen levels higher than Jiujiu, obviously only cared about one person—Homeland, so she only recovered his hp, and left others behind.

This round was tough, and Deng Bu Li Shao spoke as soon as it was over.

"That girl, Qingfeng Biying, why you only revived guru? We are not your teammates?."

"Thanks for sis Jiujiu, otherwise I will be mad."

"Right, you are too partial."

Some people were dissatisfied and kept discussing this. At this time, Homeland said: "Give the best equipment to Jiu Jiu Jiu, you guys are good?"

In that round, it was Jiu Jiu jiu that had desperately tried to save them. The equipment happened to be a nice hp recovering tool, which was suitable for such a role as Jade Immortal. So everyone agreed except Qingfeng Biying. She grumbled: "This is Brother You's effort."

Ruan Jiujiu got the equipment, but she wasn’t too happy. Xu Biying must hate her now. But Ruan Jiujiu didn't know what kind of tricks she will play on her.

It was just a game for Ruan Jiujiu, so it was a trivial matter that she leave the game at any time.

But for Xu Biying, it was a big deal.

Not only got nothing good, but Gu You wasn’t happy with her. She cried to her girlfriends for help, criticizing Jiu Jiu Jiu for stealing her boyfriend but pretending to be nice.

On the other side, Ruan Jiujiu just came out from the room and happened to be meeting Cheng Jun. He was back home.

She suddenly thought of the words by White Horse.

Before she said the following words, Cheng Jun seemed to be frightened. His eyelids were lifted slightly and his eyes were in dumb. He even didn’t change his shoes but turned to the living room.

So, he thought she was confused by fever? Didn’t White Horse say that all men like this? Ruan Jiujiu felt her self-esteem was badly hurt.

She became angry: "What kind of man are you!" Then she returned to the room unhappily and closed the door.

The phone rang and it was a WeChat reminder.

Ruan Jiujiu: "I want Xu Ji lobster, and you can only reply to me with 'Yes'. Otherwise, a cold war for a week."

Xu Ji wasn’t far from home, Cheng Jun didn't like to eat out, so absolutely he went out to buy the shrimp.

Ruan Jiujiu was about to praise him, and suddenly, a message popped up on her WeChat. It was "White Horse".

"Jiujiu, you seem to have been posted to the game forum. Many people are watching it!"

Ruan Jiujiu: My self-esteem has been hurt. 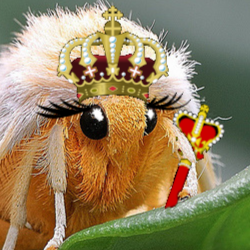 plotlayer 2020-04-28 07:52
im surprised that no one's called jiujiujiu out for being a man pretending to be a woman online? i would think that biying would immediately assume that someone playing a female character in an online game, who refuses to open voice chat is a guy pretending to be a girl to be carried, and then Ruan Jiujiu can face-slap by posting her actual face, and rubbing in how hot she is. I'm excited to see whats going to happen, thanks for the chapter!!